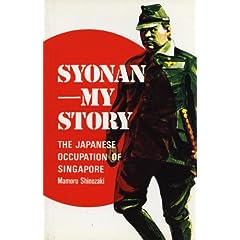 They either never taught us this in history lessons, or I just wasn’t paying attention.

Thanks to a contributor on sammyboy.com, I found out that one of the heroes of the Japanese Occupation in Singapore was Japanese. Shinozaki Mamoru was a press attache with the Imperial Foreign Service and was assigned to Singapore before the Japanese invaded.

He was jailed by the British for spying (a charge which he denied), and was freed by the occupying Japanese, and given a role as a welfare officer of the civilian administration of occupied Singapore.

Among his heroic deeds included deliberate storage of food supplies in the Thomson area so that the Little Sisters of The Poor would have a steady supply of food; and his very liberal issuing of thousands of safety passes to members of the Chinese and Eurasian communities, an act which probably saved thousands of them from being rounded up and executed.

Shinozaki eventually testified at the war crimes trials against his fellow countrymen, and later wrote a book – Synonan, My Story, which is apparently still a source of information about life in Singapore during the Occupation.

You can read more about Shinozaki here.