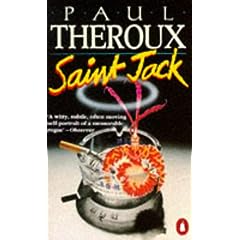 I read Paul Theroux’s Saint Jack years ago when I was in junior college, and enjoyed it partly because I thought it was banned. I only found out this morning that it was never on the MDA’s banned wagon. (Thank you Rambling Librarian for setting me straight)

But if I were to re-read the book, I think I’d still come off feeling the same glee (you know? the tee hee hee kind?) at reading about a brothel named ‘Serene House‘, situated near the then PM’s house on Oxley Road (although in reality, it’s the name of a cluster of apartment blocks off Farrer Road).

Saint Jack is set in Singapore in the 70s (it was written in the 70s too), where Theroux taught for a stint at the then SU (Singapore University), sharing the faculty with local literati such as Edwin Thumboo. A friend of mine had a stepmother who met Theroux during his stay in Singapore, and she once mentioned that he was a ‘difficult person to get along with’. Apparently, the feeling was mutual, and Theroux used some of his colleagues’ names as the names of characters in his novel – there’s a nervous bartender called Thumboo.

The other thing that got me chuckling was Theroux’s impeccably (IMHO) accurate caricatures of people he met while in Singapore, and which appears in the novel – the small group of English-educated Singaporeans in the 70s, educated in mission schools, and when asked of their religious leanings, reply, ‘we are Meffidists’; the office peon of Indian origin who has a physical impairment that makes him walk as though he were cycling an invisible bicycle; the inscrutable Chinese towkay who grunts in lieu of speaking.

Then there are the historical artifacts – and by them, I mean things which were commonly used in the 1970s in Singapore, but which have fallen by the wayside with the advent of technology, and by the increasingly American-centric consumer culture. Things like ‘signing a chit‘.

There’s a lot more to be said about the novel’s protagonist, Jack Flowers – about how he’s caught in a Singapore that’s at a crossroads, about how he embodies the unmistakable sense of alienation and exile – but I’ll leave that to the people who write that best.

In 1978, a film based on the novel was shot in Singapore. It was subsequently banned from being screened here, ostensibly because of nudity. It was never a box-office hit anywhere else, in any case. But as recently as 1997, it was allowed to be screened at the Singapore International Film Festival under an R(A) rating.

Two days ago, the papers (Today) wrote that the ban on the film had been lifted, and was now available under an M18 rating. While there wouldn’t normally be fanfare surrounding the film at all, there are a few reasons to want to buy the DVD and watch the film.

A few weeks ago, a Ben Slater emailed me, thinking I’d be interested in his new book about ‘Saint Jack’ (the film), called ‘Kinda Hot’, because he’d seen the tagline on my blog that has a quote from ‘Saint Jack’.

It’s probably going to be a darn good read, and the book’s being launched tomorrow at Borders. Slater himself will be there at 2pm to give a talk, and he’s also indicated that some of the cast of the movie will be there as well.

P.S. If you’ve got any questions regarding books or authors, like the one I had about ‘Saint Jack’, you can always ask your friendly neighbourhood librarian. There’s a promotion on, where you can ask ‘any question under the sun’, and stand a chance to win an iPod Shuffle:

Actively Seeking Knowledge or ASK! is an advisory and enquiry service by the Public Library Services. For the period up to 31 Mar 06, attractive weekly prizes of movie tickets, popular titles and a monthly bonus prize of an iPOD shuffle are up for grabs! Simply be a library member and you can join in our ASK! Promotion to win.

How to take part?
Simply ASK! our librarians at the regional libraries ( Tampines, Woodlands and Jurong) or just drop us an email at any of the following addresses:
ChildrenServices@nlb.gov.sg
YoungPeopleServices@nlb.gov.sg
AdultServices@nlb.gov.sg
FictionAdvisory@nlb.gov.sg
This promotion is valid till 31 Mar 2006 and is open to all adults, young people and children.

What questions can I ask?
Well, almost anything under the sun. However to stand a chance to win the prizes, yours should be an interesting or thought-provoking question. Examples: – Why is the sky blue? – How do I decide what digital camera to buy? – Why doesnâ€™t superglue stick to itâ€™s tube? – Do you have novels relating to double colonization?

Winners will be notified either via email or telephone. Winning questions will also be displayed at all libraries. Staff and immediate family members of NLB are not eligible for this promotion.