My friend who was asking me all those questions yesterday leads such an interesting life, travelling all over the world, meeting really interesting people and having conversations with them.

I will be writing about her encounters with Bali beach boys and NGO volunteers who work as hotel chauffeurs to fund their NGO activities. But the hour, it is late, and I have to clock-in at the factory early tomorrow morning. Why is the hour late? Because my friend called earlier to tell me she just realised there was this little known language or Creole known as Papia Kristang, which apparently is spoken in Malacca and Singapore:

CristÃ£o (or PapiÃ¡ Kristang or simply papia, i.e. language in archaic Portuguese) is a Creole language based in Portuguese spoken in Malacca, Malaysia and in Singapore.

And, we also had an argument about how ‘barrage’ was pronounced in ‘Marina Barrage’. She called it ‘barrage’, as in a ‘barrage of artillery fire’, while I called it ‘barridge’ as in ‘barridge rhymes with porridge’.

And because we liked talking to each other so much, we took a long time before we decided to settle the argument with a look up at dictionary.com. I was right, as expected, but neither of us had watched the news on the telly to know how CNA and Channel 5 presenters pronounced the word.

Then we went back to talking about the Portuguese and she said, ‘how come we don’t know that many Portuguese?’ I said, ‘Gort! We have Vernetta Lopez and all the other Eurasians on telly and radio, and we have the de Souzas and the D’Almeidas, who made their fortune harvesting gutta-percha which was used to insulate telegraph wires’.

Then my friend got sleepy and said, ‘hey, let’s talk again tomorrow, do you know where I can get good Peranakan food? I don’t, cos I no longer have a finger on the pulse of the nation’. 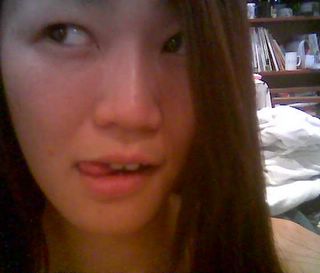 I’ll have her finger on my pulse!

I couldn’t turn down his impassioned plea, so Vicnan, you’re it: If I try very, very hard, I can adjust my spectacles with my tongue

iTunes’ party shuffle is playing a copy of: Romeo’s Heart – John Farnham – Romeo’s Heart, of which I have the original CD and therefore didn’t steal music.
Facebook Comments Box