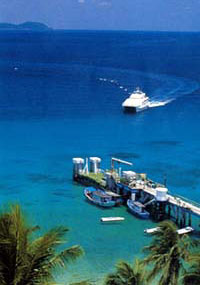 It’s the long weekend. They charge an extra $30 on all outbound flights this weekend. The bloodsuckers.

I am stuck in Sillypore for National Day. I’d like to have been able to go somewhere. Like Tioman. For some reason, I like this island, even if it’s no longer the idyllic tropical island paradise it once was. Didja know they shot the movie ‘South Pacific’ on Tioman?

I’ve been there several times in the past decade and more, and the following is what I wrote on one of these trips there three years ago:

Somewhere on Pulau Tioman there is a bunch of kampong kids learning to speak rudimentary French. There is a resort chalet complex by the beach on Kampong Tekek on the western coast of the island which is run by a Frenchman, although to call it a resort chalet complex makes it sound as if it were part of an international hotel chain, which, it most definitely isn’t. Tekek Inn is Spartan by any standard, and my friend and I happened upon it purely by chance and the sad fact that we couldn’t afford to stay at the Berjaya Imperial just one mile south of Kampong Tekek.

There isn’t much else to be said of the six days I spent there. I switched off my brain and sat by the beach drinking oh say ten beers a day or so. Before I decompressed though, I had that heightened sense of awareness of everything and shit that one normally gets when the adrenalin starts pumping because one is super excited about being on holiday.

OK, I admit that this trip wouldn’t have materialised into anything more than the mere notion of a holiday in my mind if not for the fact that my female travelling companion who had recently separated from her partner, was also hankering for a holiday, and had badgered me out of my characteristic inertia to hastily dust off the cobwebs from my backpack, pack a few t-shirts and shorts, hop in a cab and head towards the causeway.

It was only much later that I had the shrinking realisation that a female travelling companion who has recently separated from her partner has more baggage than she appears to carry.

Still, I was happy tagging along with Miss Hell-knows-no-fury and soon we were bungling our way through Johor State, first on the SBS No. 170 to Larkin Terminus, where we discovered that we had missed the last bus to Mersing, and on a bone-breaker blue and white 1980s Nissan Cedric taxi which we shared with a Chinese gentleman with permed hair and a pencil moustache who happened to be waiting for other travellers to Mersing so he could save by sharing the RM120 fare.

Miss Freshly Dumped and I spent the first few minutes of the trip through grimy Johor Baru giggling at the Chinese gentleman who had fallen fast asleep the moment the taxi pulled out of Larkin Terminus, the diesel engine’s vibrations jiggling his permed crown such that it became a fuzzy blur. Then my friend fell asleep just as we headed out of the city, and I was left to try to doze off in that wakeful way, only I couldn’t because of the way the death-wish taxi driver, for the next two hours, would frequently overtake other vehicles he deemed were going slower than we were, and I don’t mean overtaking one vehicle at a time, but a whole convoy of lorries, cars, motorcycles, protons and kancils on a two lane highway, with another convoy of the same occasionally coming down the opposite direction at speed, and often suddenly from beyond a crest in the road.

I made a mental note that on such future trips, to fall asleep as soon as the taxi left the terminus, or risk having my testicles reside permanently in my throat.

After traversing through a thousand oil palm plantations, we arrived at Mersing on the northeast coast of Johor State, ready for the next leg of our journey. Hell, I was ready for a trip on the space shuttle, having spent two hours in astronaut training in the cab. Only problem was, we didn’t have the foggiest idea where to take the ferry. But of course, we needn’t have worried a smidgin. After rattling through the seemingly sleepy backwater town for five minutes, the taxi pulled into an area of the town where every other shop was a ferry/resort/diving agency. The place was teeming with be-backpacked, be-sandaled (except Americans, who wear trainers and socks even when wading through the surf) and bewildered tourists tumbling out of buses and taxis and into the lairs of the ferry/resort/diving agencies where the mercenary tour operators squeezed every freshly converted ringgit out of them. We forked out RM185 for a speedboat transfer and one night’s stay at Salang Beach Resort. Exorbitant, yes, but before my friend could protest, I was sold by the tour operator telling us how nice the air-conditioned hut we were to stay in was. I think I was just in a very agreeable mood because my testicles were just starting to settle back in their rightful place of residence.

We stepped out of the agency office with a few other tourists who were also counting how little money they had left, and were then fetched by our cab driver from J.B., Michael Schumacher, to the jetty, where we promptly boarded the wrong ferry. Good thing they inspected our tickets before the boat departed. We waited an hour longer on the jetty for the right boat (a helpful local gentleman in a tank-top with an outrageous mullet hairstyle ala Billy Ray ‘Achy Breaky’ Cyrus told us what time our boat would dock), where I bought some tidbits and listened to the first of my friend’s many tales of woe regarding her former partner, whom she had dated for the past seven months, and whom she had planned (to herself) to marry, and with whom she had wanted to raise a clutch of children, all bearing monosyllabic New Age unpronounceable names that would only have sounded normal in Wales or if your last name was Phoenix.

I was thus happy to discover that our ride to Tioman was to be in an open-decked speedboat. Not only would that afford us an unimpeded view of the open sea, the roar of the outboard would also postpone any further discussion on my friend’s failed relationship. Or so I thought. We were actually kept sans conversation only because this was phase two of astronaut training, and I was truly fearful of being flung overboard, and I couldn’t help wondering what ‘Man Overboard!’ was in Malay. Thankfully, within the hour, we had skimmed, skidded and bounced the fifty odd kilometres and had begun making stops on Tioman Island, of which ours was the last. The other passengers, including Billy Ray Cyrus, disembarked at the various kampongs as I gradually loosened my death grip on one of the boat’s rails and rubbed the bruises on my achy breaky backside. Only then did I begin to process what I had seen, calmed by the cobalt blue waters and the emerald hills of the islands along the way.

Tioman is part of Pahang State, and is the largest of a group of islands which dot the South China Sea just off the eastern coast of peninsular Malaysia. All the islands which lie in the 200km radius are remarkably beautiful, with rugged features like extinct volcanoes and cliffs of granite. Most of the larger islands are populated, in the past by small fishing communities, and of late by staff of the island resorts and their families, and of course by souvenir peddlers who sell mostly cockle shells glued together to look like other marine animals, since Tioman and its environs have recently been declared a marine heritage area, and the poaching and sale of marine wildlife have since been banned.

Marine tourism is big in these islands, and there is, quite literally, one diving centre for every kilometre stretch of beach. But if the authorities were serious about preserving the sanctity of the marine environment, it must have been evident only below the surface, because the waters around Tioman were chock-full of speeding watercraft, ferrying newly-fleeced tourists to and from resorts by the dozen. I had travelled to Tioman twice before, once, ten years ago on a risky kayaking expedition (no lifejackets, no radio, no flares, no brains) from Singapore, and another in 1995 with my then girlfriend, in the relative comfort of the direct ferry from Tanah Merah in Singapore.

Except at Kampong Salang, where we finally docked at the last wooden jetty on Tioman. We had touched the Happy Isle. Only the sky was turning a leaden grey, the tide was low, and we were hungry, or at least I was. My friend had a stomach complaint, of which flatulence and loss of appetite were major symptoms. To her credit, she announced each time she was about to pass gas, so that her ‘audience’ had ample time to pinch their noses. Pretty considerate especially in confined spaces like those in buses, taxis and ferries.